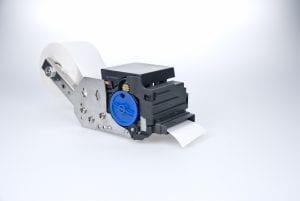 The Chinese language is the world’s most widely spoken, dwarfing the next most popular language, Spanish, by a factor of nearly three. Beyond China, the language is spoken in Taiwan, Hong Kong, Macau and Singapore, and is present extensively in countries such as Malaysia and Indonesia, not to mention sizable Chinese communities in almost all Western economies. With this in mind, incorporating the Chinese language into tickets machines found at locations such as car parks, outdoor kiosks, railway/metro stations, betting shops and ATMs, for example, can now be facilitated with Hengstler’s eXtendo XF.

To store the large GB18030 national standard master font set, which contains more than 27,000 Chinese characters, Hengstler has doubled the memory within its eXtendo XF family printers to 4 MB. In fact, both the X-56 and X-80 (the numerals represent the receipt width in millimetres) now offer larger flash and RAM. Furthermore, due to the required Unicode addressing scheme and the larger number of characters that must be stored, hardware and firmware redesigns were also implemented.

A further benefit of the increased memory means that there is no longer any limitation on the size of customer font and bitmap images that can be uploaded, thus delivering greater product functionality.

With the integral font manager, customers can upload any type of font desired (up to 10 fonts) using the upload tool that is included in the printer’s driver package. Font manager selects and matches all the characters of the font type as defined in the code page. It is also possible to select and/or deselect single characters. Hengstler only uses the font manager for licensed fonts but customers can use it to upload their own licensed or open source fonts.

As a point of note, the expanded memory also means that Hengstler is able to service languages such as Japanese, Korean, Hebrew or any other language containing proprietary character sets. Importantly, however, to avoid burdening OEM customers that do not require special character sets with the cost of expanded memory, the basic versions remain available.

The original eXtendo family of receipt type printers has been in worldwide circulation for over a decade. The successful X-56 and X-80 models enjoy a market reputation as highly reliable direct thermal print mechanisms capable of operating in environments where there are wide variations in temperature and humidity, while further benefits include compact design, accurate cutting and an extensive feature set. The need to print and cut thick paper, handle large paper rolls and detect jams are among additional capabilities ensuring the ongoing popularity of these advanced printers.