By Bernard & Company No Comments

Presentations were given by company personnel on September 13, 2019 in Ravensburg, Germany. 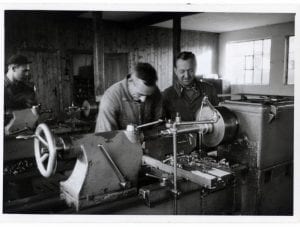 Arnold, a major manufacturer of laser technologies, recently celebrated 100 years at its headquarters in Ravensburg, Germany. The event included various presentations such as: “Development of Technologies,” “Laser Polishing-Development and Opportunities,” “Laser Treatment of Electric Sheet,” “Laser Use in e-mobility” and “From Regional Provider to Global Player.” A brief history with a focus on emerging technologies was given by Hansjörg Klotz, the sales director.

The company was founded in 1919 as a mechanical workshop by Anton Arnold. At the time, the company was considered a special welding plant for cast iron and aluminum. From 1950, under the leadership of Karl Arnold, the company developed contract turning for automatic turning parts. From 1969, the focus shifted to equipment construction and special machines for various industries. In 1985, the first laser system was built for ZF Friedrichshafen. 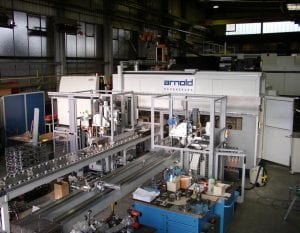 In 1985, Spectra Physics, the predecessor of Rofin Sinar, reached out to Arnold for the construction of a rotary axis and clamping technology for a laser welding system for transmission wheels. This project was the first step for Arnold into laser technology. Driven by the idea of using the laser not only as a tool, but as the technology for beam guidance requirements and understanding of the processes, many components have been developed and patented over time. They can still be applied today with improved details. Available in 1985 and beyond, Arnold constructed thousands of clamping devices for milling machines and engine processing. Also included were pallet change systems for large machining centers, assembly lines for motors, test fields, keyboard drills and battery levels.

While competitors need to adjust beam guidance after every mirror change, the change was a matter of a few minutes for Arnold and production could be continued immediately. This production-oriented thinking has continued with the company’s machine designs. All important components were geometrically overdetermined and could only be installed with proper production.

In the first years, Arnold focused purely on welding machines. The aim was always to build a single block machine, possibly supplemented by conveyor belts for component supply and removal. 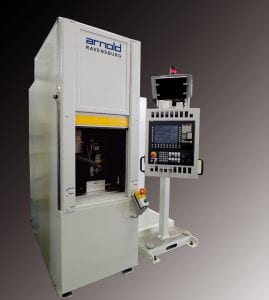 Later on, more and more functions were integrated. Parts had to be pressed, heated and brushed, and seam detection systems, component handling, conversion strategies, process monitoring, different beam sources, laser concepts, to name a few, had to be integrated into the systems. The effort for commissioning and control grew almost limitless.

Even though there were isolated laser projects parallel to the classic special machine construction of the first few years, the main focus of the company since the 1990s has been the construction of laser systems. The first few laser applications were used in gear wheels, heat exchangers, shaft welding with induction and starter contacts for incandescent lamps. 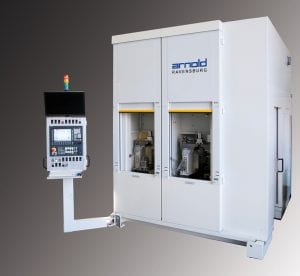 It has always been important for Arnold to participate in European-funded research projects. After the fall of the Berlin Wall, contact with Fraunhofer-IWS in Dresden was established. Countless mutual visits, the exchange of process experience and material knowledge on the part of the IWS as well the mechanical engineering experience and enthusiasm of Arnold quickly bore fruit. In 1994, Arnold, together with the IWS and EFD (manufacturer of induction plants), delivered the world’s first plant for welding cast iron to steel. Ford in Düren, Germany was the customer that benefitted from this, producing drive shafts.

Together with IWS, Arnold has developed Remoweld Optic, a high-frequency optic scanner. With this scanner, copper, aluminum and mixed compounds can be welded virtually splash-free. With IWS, the company exhibited the optic scanner at various trade shows. The response has been very positive and several interested parties have approached IWS with potential applications.

In conclusion, Arnold has undergone many transformative changes in the past 100 years and it continues to expand its capabilities to better serve its customers.

GMTA is the exclusive distributor for a number of top-quality German and other metalworking machine builders companies including Arnold, BvL, K+G, Praewema, Profilator, Rasoma, Samag and WEMA Glauchau. The company’s headquarters is located in Ann Arbor, Michigan with a subsidiary in Queretaro, Mexico.