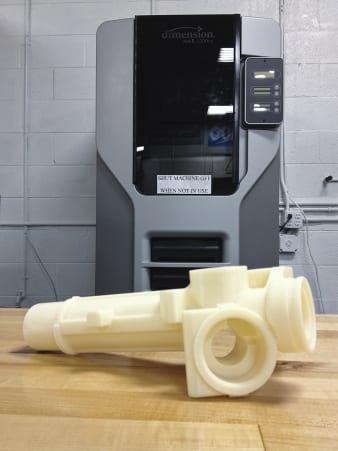 3D printing, also known as additive manufacturing, has been incorporated into the engineer and build phases of workholding devices and other products at James Tool.

Morganton, NC – James Tool designs and manufactures a wide variety of hydraulic workholding devices, used in aerospace, automotive and other high-precision industries.  Because of the continuous custom work done here, it is imperative that the company keep abreast of all technological developments in the design and production of its products.  To that end, James Tool has recently installed 3D printing, a form of additive manufacturing, to its Engineer & Build Hydraulic Workholding Division at the company.  James Tool also offers CNC Production Machining and Non-Production Precision Machining to its customers, who comprise major OEMs and suppliers to aerospace, automotive, off-highway, energy, nuclear and transportation industries.

According to Jeff Toner, president of James Tool, “We are always watching trends in the manufacturing industry and we started seeing 3D printing make an impact, some years ago.  We waited until the technology had evolved and become more affordable before making our investment.”  The first machine was purchased recently and is currently used to support the company’s workholding division as well as help in the estimating of CNC machining opportunities. 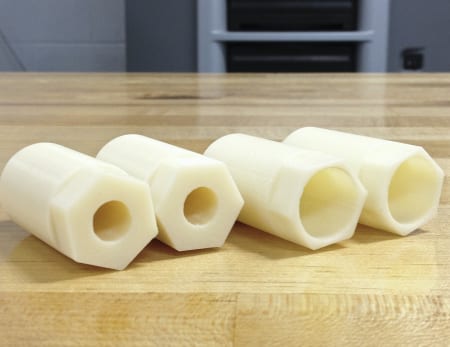 3D printing is a form of additive manufacturing, in which material is built-up, one layer at a time, to create a 3D solid working model from a CAD file.  James Tool engineers believe this technology is substantially changing the way the company can serve its customers.  It is referenced as additive manufacturing to distinguish it from the subtractive process of traditional machining, in which metal chips are removed from the surface of a blank workpiece.

James Tool assigned a team to research the current 3D printing technology in great detail, before making their purchase decision to acquire a Stratasys Dimension 1200ES machine.  This machine has the capability of running parts with a 10” x 10” x 12” envelope in an ABS plastic substrate.

As Toner explains, “We were up and running parts within two hours, after the installation and set-up.  This included the initial calibration on the machine and training from the local technician.  The 3D printing image gives our engineers a cleaner concept and enables a much more robust design process, as we can see clamping tabs, locating pins and the entire work envelope more clearly.  This results in an easy-to-use, cost effective tool, plus we have significantly shorter times needed for quote and order-to-first part sequencing.”   Because James Tool had run 3D imaging in its CAD designs for over 15 years, the transition to 3D printing was practically seamless, he added. 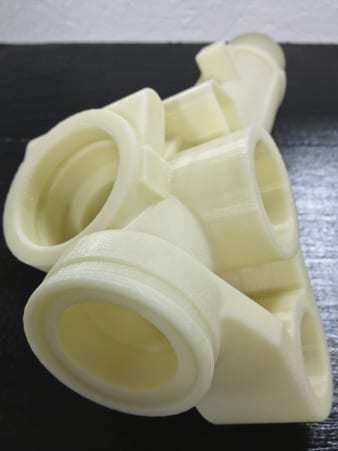 James Tool Vice President and General Manager Tim King further notes that, while the interaction between James Tool and its customers has not changed substantially, it is quite helpful to have an actual part generated through the 3D printing process, before engineering and quoting begin.  He sees this new capability as a positive extension of the existing customer service process at his company.  The first customer orders to benefit from the use this system at James Tool have already been secured and the results have exceeded expectations, King said.  “When you can go into a meeting with an actual part in hand, it can help in many ways.  The customer and we can often see desirable changes that might make the component function more effectively, be easier to machine, or both.”

Peering into the crystal ball for a moment, Jeff Toner also notes that he sees additive manufacturing as a true “game changer” for the machining world.  “The day is not far off when subtractive machining will be obsolete and actual production parts will be printed rather than machined using conventional methods, on a very large number of the jobs we handle.”  He plans that his company will soon become a regional leader in the additive and other advanced technology arenas.  “The future of 3D manufacturing is really limitless, as anybody can now order a desktop 3D printer for their business or home office and have a 3D prototype part in less than a few hours, once they master the system.  I expect this technology will revolutionize manufacturing and create a new breed of entrepreneurs in our industry and others.”

Quantifying the impact of this new technology at James Tool, Jeff Toner concludes that 3D printing has already reduced engineering and quoting time substantially for workholding fixtures and CNC production jobs at his company. James Tool runs roughly an equivalent amount of work in production and one-off or short run jobs.

In its ongoing effort to maintain a quality workforce, the company partners with Kennametal on tooling advancements, as well as maintaining a full training facility on its Morganton, North Carolina campus, which has recently expanded to house more machining, finishing, quality lab and large work piece handling equipment. James Tool actively trains many of its employees in cross-functional machining operations, proven out by the many work cells the company operates in its various shop departments. Jeff Toner and Tim King both believe this strategy makes the company more flexible and capable for its customers.