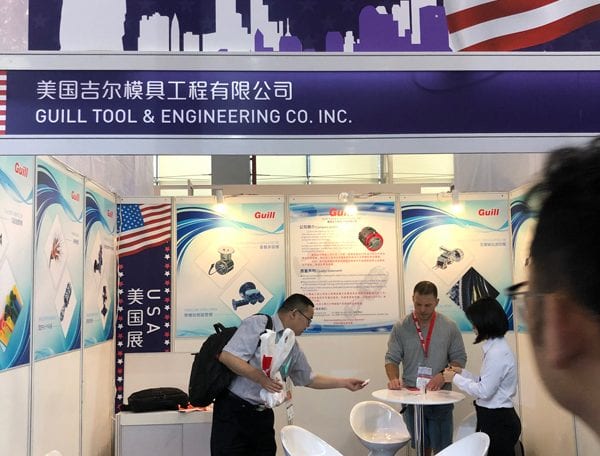 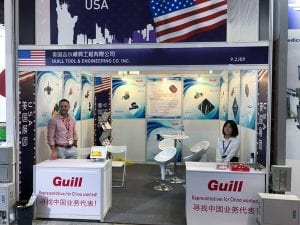 Guill Tool & Engineering, Rhode Island, a global manufacturer of extrusion tooling, recently exhibited at Chinaplas. Chinaplas is the world’s leading plastics and rubber tradeshow with over 160,000 visitors from around the globe. The show was held on May 21-24 in Guangzhou, China.

Guill is committed to expanding their business in Asia, and, according to Matt Christofaro, Sales Executive, this effort is one of the main reasons they attended the show. Guill has been seeking additional sales representatives in Asia for the last couple of years and met with a number of promising candidates while at the show. Christofaro discussed the effort to expand in Asia, stating that, “there is definitely huge potential here. Even a fraction of the market share could be huge.” He added that if Guill is serious about doing business in China, they must attend this show every year.

Tom Baldock, Sales Representative Manager, was pleased to have met with some potential Chinese customers that have Guill heads and would like to work directly with Guill as opposed to working through the OEM’s. Baldock said that “there are Chinese companies that want American technology, which is still perceived by many as the best technology available.”

Guill had an interpreter at the booth which enabled them to meet with a number of customers, large and small, in person at the show. This, according to Christofaro, “was great for both parties.” Christofaro also noted that “there are a lot of companies (many Chinese) with very impressive extrusion lines that were making product right there at the show.”

Guill products featured at Chinaplas were mainly medical tubing dies. Also shown was a customer sample of a transitional wound drain tubing. Attendees were impressed by the fact that it can be created using a continuous process. Guill had inquiries about their 5 and 6 layer automotive tubing. Booth panels showed that Guill also makes dies for products in other industries, such as wire & cable, hoses, corrugated tube, pipe, etc.