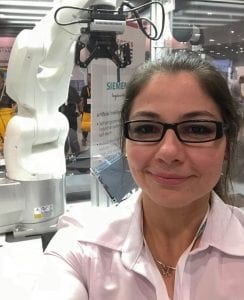 Alessandra Da Silva has spent the past 12 years working as an electronic engineer for Siemens. Originally from the southern part of Brazil, she graduated with a degree in electrical engineering from Sao Paulo University. Her first job experience came during high school, when she worked as an electronic technician in a Brazilian factory. This was the first time Da Silva was introduced to Siemens products, which she enjoyed using.

Moving to Sao Paulo, Da Silva worked as a software developer and also as an automation engineer and project engineer. She started working for Siemens in the IT department, then moved to product design and software development. Da Silva’s current job title is Head of Artificial Intelligence and Edge Computing Deployment. She works in artificial intelligence and edge computing, as well as participates in R&D to test new projects. While she is very motivated in these areas, Da Silva would like to combine her work in artificial intelligence with robotics, in the next phase of her career.

“A combination of advanced smart technologies, artificial intelligence (AI) empowers machines to perform tasks that were traditionally only possible using human intelligence. Within manufacturing, AI has evolved in its capabilities over the years and found innumerable applications in industrial automation,” Da Silva notes.

The benefits of AI can be divided across product, process and strategic levels of manufacturing. At the product level, AI can be used to deliver end-user benefits, while at the process level, it can be applied to automate and advance operational capabilities. At the more strategic level, AI can be applied to deliver insights that inform decisions made by management. Da Silva says the AI revolution will introduce several capabilities into future automation systems, including improved efficiencies, quicker time to market, increased customization plus reduced manufacturing and operating costs, integrative factories, effective asset management and more. In addition, artificial intelligence helps solve complex issues with minimal or zero human interaction, enhances safety functions by accessing industrial areas that are hazardous to humans and also solves a diverse set of tasks simultaneously. She adds, “Automation systems embedded with AI allow real-time integration such as between a programmable logic controller (PLC) and AI’s data processing capabilities. Because all devices are connected, there is a huge amount of data that is generated. AI further helps manufacturers convert the data into insights that can be used to predict equipment failures and prevent mechanical downtimes.“

Industrial Edge enables intelligent, high-performance data analysis directly within the automation system running on established standards like PLCs, distributed control system (DCS) and supervisory control and data acquisition (SCADA) protocols. With Edge Computing, large volumes of data can be processed locally on the plant floor. It unfolds its full potential in combination with cloud-based analytics on the open Industrial Internet of Things (IIoT) and Siemens Mindsphere, the company’s proprietary cloud-based technology. According to Da Silva, “This greatly reduces storage and transmission costs for users, as large data volumes can be pre-processed and only the relevant data is transferred to a cloud or IT infrastructure. The optimized data points, transferred to the cloud, provide access to more computing power and large storage capacities. With Industrial Edge, users enjoy all the benefits of edge and cloud computing, optimally tailored to a company’s specific requirements.” 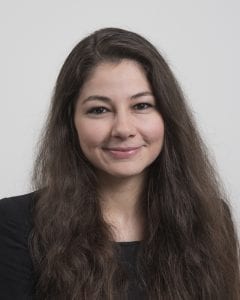 When reflecting on her career as an engineer, Da Silva was always interested in engineering and says she was influenced by her cousin, who went to a technical school. While she didn’t have specific mentors, Da Silva received encouragement from her family and also her boss at the factory who encouraged her to go to the university. During her internship, she was part of the maintenance department, fixing machines and programing PLCs. As a woman in engineering, Da Silva says she was fortunate to have positive experiences in her field of work. Although she says some countries weren’t accustomed to seeing a female engineer, she was treated with respect and appreciation of the competence she brings to her work.

In 5 to 10 years, Da Silva plans to continue working with technology and see how it evolves. The technology that most excites her in the future is artificial intelligence because, since its beginning in the 1950s, there have been constant new developments. Outside of work, Da Silva enjoys playing games, especially the digital kind. She lives in a smart home and always tries to learn more about technology, while she regularly converses with her virtual home “assistant”.