Hycorr — A Company of First’s Continues the Trend 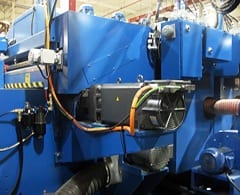 Fred Harrison, president of Hycorr Machine Corporation, a Kalamazoo, Mich. builder of corrugated boxmaking machinery, has always believed in being first.  That competitive and can-do spirit meets every visitor to his company’s website, where a number of Hycorr first’s are listed.  The company was the first U.S. rotary die-cutter to introduce an integrated stacker, the first U.S. builder to introduce the reverse angle doctor blade on rotary die-cutters and the first builder in the world to offer an automatic cutting-anvil speed compensator, Auto-CompTM, which was later joined by Hycorr inventions of a quick-change anilox roll system and modular dwell section with inter-station dryers.  All these innovations to the industry were achieved in the first 15 years of operation for this company, founded by Fred Harrison in 1985.

Never one to rest on his laurels, Harrison recently put his engineering team on the task of improving the overall controls package on the company’s line of rotary die-cutters.  In particular, the servo system and total controls package needed upgrading with newer technology.  The previous technology functioned properly and to a satisfactory degree to keep the company competitive in the paperboard container industry, but Hycorr engineers were seeking increased cost containment and a reduced footprint, with no loss in performance on their machines. 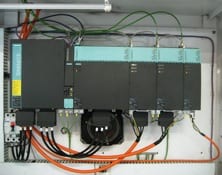 After considerable research, and based on the direct experience of a recently hired engineer, Hycorr began its investigation of a totally new system, one that would not only reduce servo drive system and related energy costs, but also integrate both the programmable logic controller (PLC) and human-machine interface (HMI) functions.

Hycorr’s electrical engineer, Mike Walter explains, “We have been building servo driven rotary die-cutters for over 10 years.  We wanted to look at a new system for a series of machines that were being built for new customers.  After the first price pass, we knew we needed to continue our talks with Siemens.”  The package under consideration included servo motors, Sinamics® S120 servo drives, and a Simotion® D motion controller with PLC functionality.  Walter continues, “At first, we were only considering this new system for the motion platform.  We needed a servo system that would eliminate some gears and maintain the tight tolerances our customers expected for printing and diecutting.  We really needed a system with built-in rotary motion functionality.” 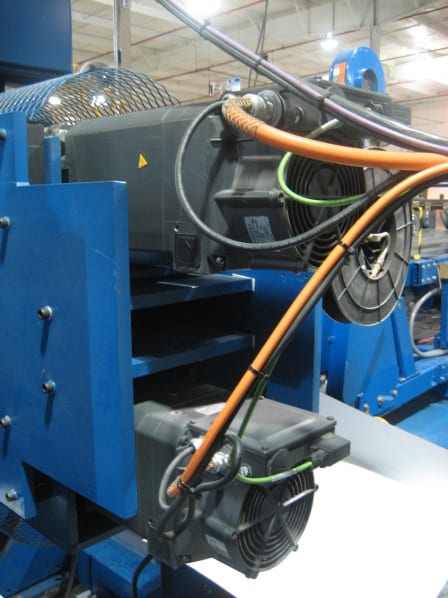 Siemens provided the Simotion Shaftless Standard to Hycorr, which greatly reduced this customer’s engineering time.  The solution reduced Hycorr’s costs in both hardware and engineering time in terms of the product acquisition as well as the operating energy costs associated with these typically high power-consuming machines.  Walter and his team determined that the Siemens motors and drives package was an ideal replacement for the previous vendor’s technology, plus the seamless integration of the PLC and HMI afforded Hycorr additional advantages in control and operational flexibility.

In the proposed implementation of the new solution, each technology (motion, PLC and HMI) had built-in connectivity to the others, making assembly time another area for major savings for this machine manufacturer.  Overall, the savings for Hycorr was calculated to be approximately 50 percent,

Capping the decision to make the switch to the Siemens solution was a footprint reduction of 30 percent in control cabinet space.  As Walter simply puts it, “The components were smaller.  With the combination of the active interface module and active line module, we eliminated the need for line reactors or line filters, thereby saving space, plus mounting and hardwiring time.”  Complementing these savings, the Siemens servomotors specified for comparable performance levels were considerably smaller and less expensive to operate than the previous units used.

Working under a tight deadline, the first rotary die-cutter was built and commissioned onsite by Hycorr and Siemens at the end user’s plant.  Shortly thereafter, the second machine, needed by another Hycorr customer, was built on a production schedule that Fred Harrison would deem another first for the company in its speed.  This improvement in engineering, production and assembly time resulted from the Simotion Shaftless Standard provided at no cost by Siemens to its customers.  This Shaftless Standard enabled Hycorr engineers to do much more modular implementation of components plus the interfaces of the overall motion system to the controls architecture.  By this process, Hycorr saved approximately 80 percent of its engineering time on the machine build.  The entire engineering file for the first machine was loaded from a single compact flash drive and, with minimal debugging, the engineering on the second machine was completed quickly.  This demonstrated the serial machine benefits of Simotion, according to Mike Walter.

Fred Harrison concludes, “Hycorr will continue to strive to be first on the market with many innovations, always maintaining the highest quality standards of machine performance.  No customer will ever be a trial case for us.  We deliver productivity to our customers’ bottom line because we’ve invested in maximizing our own.”