Systems supplier presents its new blanking press EV 3.8 and other solutions for the efficient production of electric motors and batteries 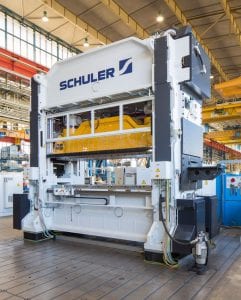 The need for greater energy efficiency and the search for alternative energy sources and motors are among the key innovation drivers in industry. Schuler offers various solutions to produce electrical motors and battery cases. At its headquarters in Göppingen, Germany, the systems supplier recently presented its new high-speed blanking press Smartline EV 3.8 for the production of interlocked motor cores, which will be delivered to the German company Waasner, and other solutions for the era of e-mobility. More than 50 people took part in the Schuler TechDay.

Most of the car drivers in the Western hemisphere have probably never heard of the three most successful electric cars in China, — the BAIC EU260 EV, the BAIC EV200 or the SAIC Roewe 550 PHEV. A study published by fka and Roland Berger says that China will manufacture 6.8 million electric cars by 2021, as Schuler’s Rainer Berkefeld pointed out at the company’s TechDay E-Mobility. This is more than the U.S. (3.1), Germany (2.2) and Japan (1.0) combined.

One of the reasons why the rest of the world seems to be so far behind the People’s Republic is that China already has a quota for electric vehicles (EV) of 8% since last year; a long-term goal of 100% is being discussed. Yet, there is a global government push: Germany, the Netherlands and Norway think about a 100% quota by 2030, and France wants to ban the sale of petrol and diesel cars by 2040. “By this time, 35% of cars sold globally will be electric,” Berkefeld said.

E-mobility is growing everywhere, his colleague Simon Schmidt agreed, and has also become a top issue for the car manufacturers. In order to increase the efficiency of the motors, the geometrics of the electric motor lamination have become more and more complex, and as a consequence the dies are getting longer and longer: “Especially because two-row-dies are nowadays state of the art. This is why the table of Schuler’s new high speed blanking press Smartline EV 3.8 now has a length of 3.7 instead of 2.7 meters and can process a strip width of up to 630 mm.”

At the same time, the material thickness has been reduced down to 0.35 mm or even 0.2 mm. “Analyzing the new requests of the automotive industry with regards to e-mobility, the lamination thickness is currently defined at a range of 0.25 mm up to 0.275 mm. Therefore, we as a press supplier have to ensure a perfect positioning and levelling of the slide and table.” Considering this challenge, already 15 years ago Schuler has developed a penetration depth control (PDC) to provide a perfect positioning as well as repeat accuracy of the slide. “This way, we can warrant a perfect punch into the material, whereas we achieve an interlock exactly at the penetration depth. In detail, the Schuler Smartline series is capable of adjusting the PDC at a deviation of 0.01 mm through the entire stroke range.”

Regarding the extended dimensions of the Smartline EV3.8, Schuler was additionally challenged with the physical properties of a 3.7 meter slide. “With the smaller types of the Smartline series, we used to measure with a laser how deep the slide is going down, and the machine corrected the penetration depth, if necessary, within every single stroke automatically. Now, with a 3.7 m slide, there is deflection we have to consider.” For the advanced PDC, Schuler has put a strain gauge into the kiss blocks of the die which substitutes the laser: “Thus, the press force can be kept constant and the deflection of the slide can be controlled. No matter what your laminations look like, you will always get the perfect rotor and stator stacks.”

Schuler’s target was to offer its customers a machine that is reliable, rigid and precise while using the knowledge of building presses for 180 years.

“We can run the full speed of 250 strokes per minute with the full press force of 3,150 kN and the maximum upper die weight of up to six tons,” Schmidt elaborated. The press is harmonized so well there is no need for a special foundation: Customers only have to take care that the foundation can carry the static weight of 110 metric tons. “Thanks to the perfect interaction between static and dynamic counter balance, there is a vertical movement of the press at full speed of less than 1 mm.” As a result, there are no wear parts in the slide guiding, pressure points, connection rods and main bearings, which minimizes the service costs. 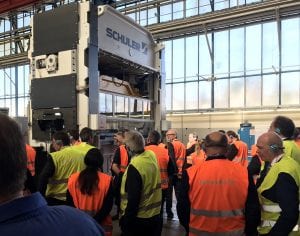 More than 50 people took part in the Schuler TechDay

Although the press is relatively heavy and big, Schuler only uses two instead of three pressure points: “We want to know which press force is exactly on which pressure point, to make sure they are detected to carry this force. With three pressure points, there will always be a small deviation, and it is only a matter of time until you have wear and problems. With two pressure points, the press is physically harmonized because of a predefined press force flow, and the wear is minimized. Another effect is a levelled slide: We can guarantee a parallelism from left to right of 0.04 mm per meter.”

Thanks to the advantages of the new Schuler Smartline EV 3.8 – such as the advanced PDC, a use of two pressure points, four pretensioned slide guidings as well as a perfect interaction of the static and dynamic counter balance – the die lifetime can be increased by up to 30%.

Up to 180 million strokes over the die lifetime

“With high speed steel used as active material, you can do approximately five million strokes in a die lifetime,” Daniel Kittig from die manufacturer Aweba continued. “With Powder Metallurgical, we are talking about roughly 30 million strokes and with carbide almost 180 million strokes, depending on process conditions and material properties.” In most cases, Aweba’s die engineers start with an idea or a drawing they receive from their customers. “Based on that, we are creating a design, taking into account part geometry, size, complexity and tolerances.”

The quantity of the laminations the customer is going to produce is decisive for choosing a single, double or multi row dies, but this also depends on the press capacities and capabilities: “Our goal is to provide the customer a maximum of flexibility. This means that he is able to react on deviations and variations due to the process and material issues. Therefore we integrate features like adjustable inserts.”

Each die has an individual design. Usually, pre-cuts are made in the first steps of the die as well as cut outs to reduce tensions of the stripe material. Next, the shape of the rotor is cut out step by step, a process which is separated in two, three or more different, single stations. “The geometry would be too instable to be combined in just one or two stations,” Kittig explained.

In the following station, the separation sheet for the interlocking operation is punched out pneumatically. The embossing for interlocking the laminations can take place either close to the shaft hole, between the shapes or close to the diameter: “But we also use gluing procedures implemented in our designs.”

“Based on the higher and higher quantities the customers are expecting, we also have layouts for double or multi rows like they perfectly fit on Schuler’s EV 3.8 press”, Kittig said. “Here, we have a better material usage.” He concedes that also for Aweba it is a big challenge to create a die in this length and with this precision: “The accuracy comes down to a few microns all over the die.”

However, the main reason why electric vehicles are still more expensive than cars with an internal combustion engine can be found in the batteries. Thanks to economies of scale, this will change by around 2026: By then, statistics published by Bloomberg show that batteries will account for 24% of the overall costs – compared to 42% in 2018 – and, as a consequence, cars with an electric motor will be financially more attractive than with an internal combustion engine.

“In today’s electric cars, there are Li-Ion batteries with an overall capacity of 120 GWH”, Schuler’s Rainer Berkefeld said. “This capacity will increase by 2022 to more than 400 GWH, which corresponds to about one billion cell cases which must be manufactured.” According to fka and Roland Berger, China alone will produce cells with a total capacity of 178 GWH between 2016 and 2021, followed by Korea (98 GWH), Japan (87 GWH), the United States of America (74 GWH) and Germany (18 GWH).

More than half of the cases on the market these days are either cylindrical – like in the electric vehicles produced by Tesla – or prismatic, used by Toyota, Mitsubishi, Honda, BMW, VW, Audi, Chrysler, BYD, Ford and others. While cylindrical cells are cheap and commoditized, they need a sophisticated battery management system. Prismatic cells, on the other hand, offer the best scalability and a high cycle life; however, their production is currently still expensive.

“Schuler has developed a fully automated production line for prismatic cells which is not only five times faster than current solutions, but also saves metal,” Berkefeld said, “with standard machines and proven technology that has been used world-wide in the automotive and packaging industry.” The raw material is made of aluminum slugs, which are formed with an impact extrusion press. While the punch is pressing onto the slug, the material flows against the punch travel direction.

After that, the preforms are scanned from both sides in order to detect any cracks or deformation. Those that are out of specifications are blown off the line to prevent a downtime in the subsequent process. In the next step, the preforms are separated into four lanes and fed into the 4-out die of a 300 ton post-processing press. Apart from wall ironing, additional features like fine stepping or calibration can also be integrated.

Then, the cases are fed upside down into the trimmers. The trimming head is working from inside to outside by means of a wobbling movement in order to avoid an inside burr. After the cans have been cleaned and dried, they are ready to use – if they have passed the final vision inspection, that is. The high-speed line is in operation at a major battery manufacturer and can produce more than 30 million cases per year.

Schuler also offers machines for the manufacture of battery lids. They can be produced on a stamping press with a progressive die featuring twelve forming stations, including functions like piercing, trimming, embossing and separating.

About the Schuler Group – www.schulergroup.com
Schuler offers customer-specific cutting-edge technology in all areas of forming technology – from networked presses to press shop planning. In addition to presses, the product portfolio also includes automation and software solutions, dies, process know-how and service for the entire metalworking industry. Its customers include automobile manufacturers and automotive suppliers, as well as companies from the forging, household appliance and electronics industries. Presses from the Schuler Group mint coins for more than 180 countries. As a provider of innovative system solutions, we support our customers worldwide in the digital transformation of forming technology. In the 2018 fiscal year, Schuler generated sales of € 1,212 billion. Schuler AG, founded in 1839 at its headquarters in Göppingen (Germany), has approx. 6,600 employees at production sites in Europe, China and America as well as service companies in over 40 countries. The company is majority-owned by the Austrian ANDRITZ Group.